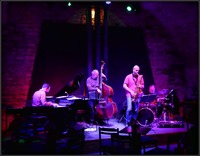 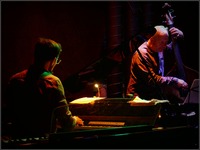 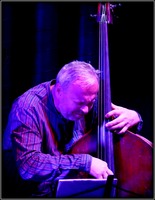 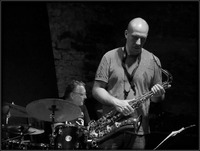 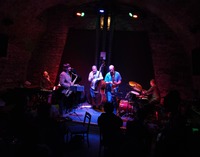 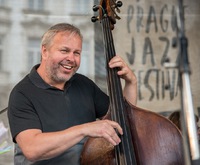 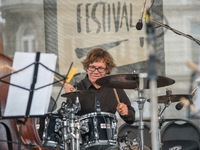 THE GHOST OF JAZZ

As a sax player in communist Czechoslovakia, I landed the weirdest job. It was a small role in a fantasy documentary about the famous prewar Czech jazz composer and theatrical alchemist, E. F. Burian. Wearing heavy minstrel makeup, I was to impersonate a nameless black jazz saxophonist who, legend has it, lived and played in Prague during the 20ies. Nobody really knew who this guy was or even whether he actually existed. He was more like a ghost of the past, an outlandish and picturesque apparition in a somewhat sheltered, petty bourgeoise Mitteleuropean milieu. And yet, that's exactly what jazz was to a lot of Czechs for decades: a dreamy, yet provocative mirage from a land far away. Later, under the oppressive regime, it also became a wistful and hopeful echo of freedom.

It might seem as if jazz and original Czech folk music are worlds apart. Compare Czech peasant earthiness with the tension of Afro-American rhythms and the primal howl of the blues; the provincial priggishness of a Czech small town to the cool, slick worldliness of a jazz metropolis. But exactly here was the attraction for certain restless denizens of the sedentary Mitteleuropean milieu. Jazz was always a completely different planet. If you dig deeper, though, there are also surprising similarities. Take lively Moravian folklore: there is no swing per se in it, and yet, that music is swinging like mad! It is miles away from the blues, yet there is great emotion in it, pain and joy, a lot of raw holler there to be found. The Czech love affair with jazz was always twofold, jazz was an escape to a world of complete otherness, but also a new field where natural instincts could roam free.

Cut to Prague, A. D. 2017. Beneath the soft, picture-postcard facade of the historical Old Town you find a cosmopolitan, open and inspiring Mitteleuropean metropolis. Yes, sometimes quirky, taxing, even backward, but also full of ambition and a certain thrust forward. And full of art - jazz notwithstanding. While a nameless negro saxophonist in the Prague of the 20ies was more like a fantastic jazz ghost, today the young confident jazzers playing in swanky venues like Agharta or Jazz Dock are quite real - and for real. In the 60ies, musicians like Miroslav Vitous or George Mraz had to exile themselves to become world class jazz bassplayers. These days the scene is teeming with talented and rather studied musos, who freely mingle with foreigners, seekers of a different creative spark.

It is exactly the rich tradition of jazz double bass players, founded by the two aforementioned Czech jazz superheroes, from which the bass player and composer Jaroslav Šimíček comes from, and to which he belongs. His Quartet (or Quintet) comprises of the skillful, uninhibited and savvy sort of musicians of the new Czech jazz generation. The debut CD of Šimiček's Quartet, "The Way Home," came out in 2009. Since then, Šimíček compiled a whole lot of new original material, urgently calling for digital lockdown. Also, the band underwent various personal changes. Lately, there are two saxplayers alternating in the frontline, David Fárek and Osian Roberts, a Welsh native who found his thrill (cherchez la femme!) in the Czech lands and quickly became a fixture of the contemporary Prague jazz scene.

The idea of teaming up both saxophones came up literally at the last minute, just before going to the studio. Hence the elusive and ironical title of the new CD - "Quintet". It was an excellent, and also logical idea. The result is cool, urban jazz, in many ways abstract and refined, at different times also robust, bluesy, moody, lyrical. Šimíček is a skilled arranger and a composer with penchant for classical music who is not afraid of complexities. The music of the Quintet is based on a fine balance between composed sections and improvised soloing. A few tenorsax "battles" here are a treat (as in New Suite Part III). At times the music is reminiscent of the hard bop of the Blue Note era (in Agara), then, as in the piece titled Peace, it smoothly slips into jazzy urban melancholia, delicately layered with rather Moravian gentleness and dreaminess. Here the lyrical saxophone (Roberts) is backed with the ruminative piano of Vít Pospíšil. Yet in another piece, Šimíček's compositions betray a more fusion influence, perhaps close to the realms of Michael Brecker or even Chick Corea (in A Glass Of Blueberries). The album is dominated by the three part compositon, New Suite. Here we thoroughly depart from the regular form of a conventional jazz tune to venture into a wavy landscape of structural and emotional contrast, ranging from abstracted and detached to heated and intense, from effortlessly playful to pensively thoughtful, even meditative. The whole CD concludes with an epilogue, which is rather symbolic. Instead of a whole band, there is only a solo piano, instead of heavy or dramatic finale, just a short ponderous moment and an open ending, as if ruminating upon "what's next".

As all good musicians, the members of Šimíček's Quartet / Quintet were and are quite busy in other projects of various sorts, Fárek performing with the bands Nedaba and Hot Line, Roberts appearing with many distinct Prague jazz personas (Jan Kořínek, Najponk, Ondřej Štveráček). Pianist Vít Pospíšil is linked with the bands like Jazz Efterratt and Luboš Andršt Group. The drummer Dušan Černák comes originally from Slovakia and on his CV are experimental and / or world music bands such as Cirilic, Oran Etkin or Triptych. Jarek Šimíček, originally from North Moravian city of Ostrava, is himself a "veteran" of various bands and projects, both as a bandleader and a sideman. Most recently he is a spiritus agens behind the all female vocal trio Prime Time Voice. This latest album sure is Šimíček's strongest and most compact creative statement to the date, as well as of the Quintet as a whole. If the ghost of a nameless black saxplayer, lost in Prague of the 20ies, is still listening, he must be quite surprised - and delighted. 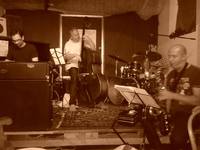 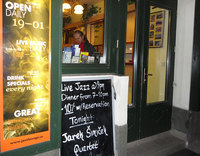 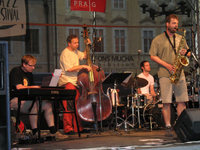 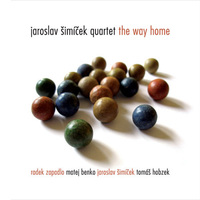